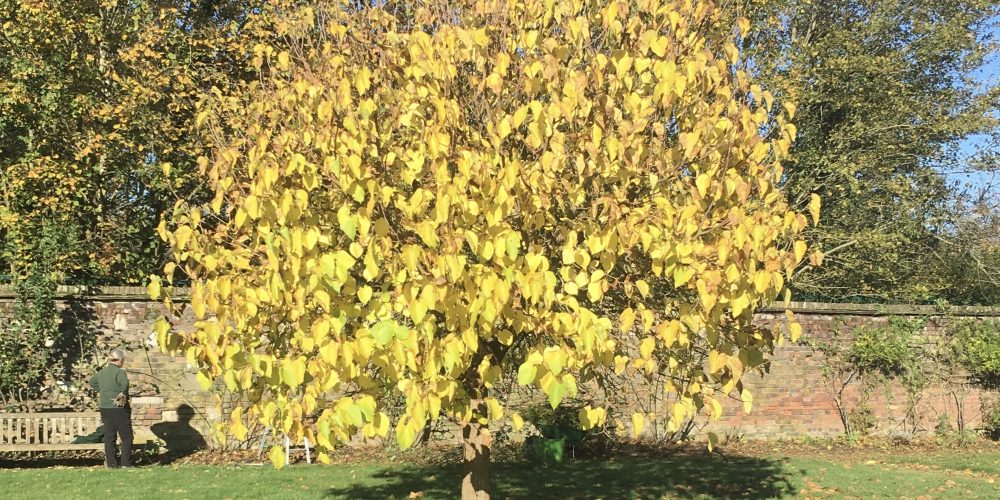 The very rainy weather has been a challenge over the past couple of weeks but did provide us with the perfect  conditions to lay wildflower turf along the waterside, extending the meadow area.

Timing is everything, as they say, and the landscapers chose exactly the right week to start their work, digging out the 4 new “cutting beds” at the north end of the Cloister Garth enabling us to re-locate the turf to the meadow. It was wet, heavy, muddy work but the newly turfed area already looks as if it’s been there forever. The downpours of rain gave it an excellent start, now the grass and wildflowers can root down and settle in before the weather gets too cold.

That was one big job from the “to do” list completed and this week we achieved another by working our way along the long rose border in the Cloister Garth, pruning and tying-in the climbers and rambling roses. I say “pruning”, but in some places it felt more like mortal combat! Even with the right PPE (face visor and thick leather gauntlet gloves) I still managed to come away bleeding with scratches to face, hands, arms and legs!

The roses have been prolific all summer and clearly love this sunny wall, but many of them have been so vigorous that they were completely entangled, with each other and with the rampant jasmine. It was as much a mental challenge to work out which stem belonged to which rose and then decide where to make the final cut (and what to sacrifice for the greater good) as it was a physical challenge to get in amongst the jungle of thorny stems and knotted foliage. It took us all week, but it is done, and hopefully the pruning will invigorate all the roses and mean that we get more blooms next year that are not 12 feet up in the air! It is also now much easier to access the border beneath the roses and see the planting space for the scented plants that will be going there soon.

We have been raking and collecting leaves to bag up and store for making leaf mould mulch. So far we have filled 2 large builders’ bags. They will sit quietly at the back of the composting area for the next couple of years, rotting down slowly, and then we’ll be able to use the valuable leaf mould to add nutrients and suppress weeds in the beds and borders.

Late autumnal treats on view in the gardens right now…..