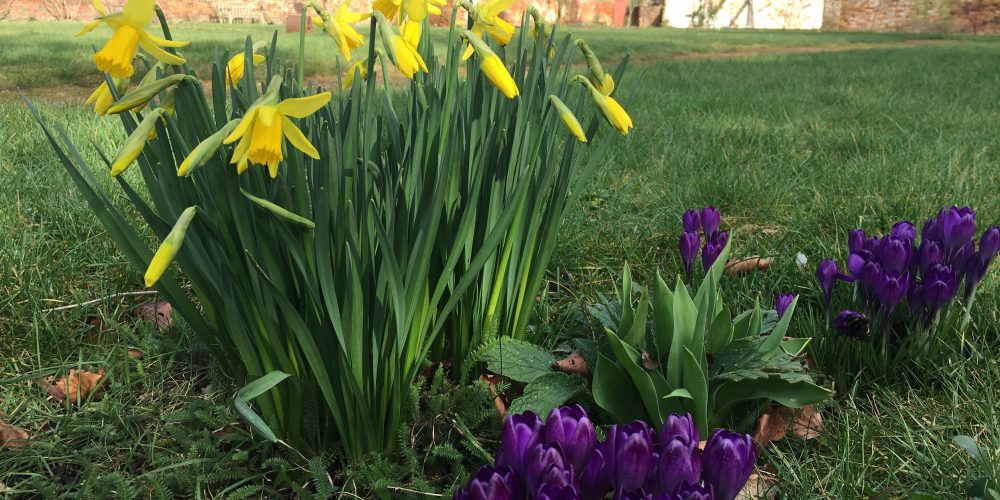 Early spring in the Gardens brings out clusters of bright, breezy daffodils, gloriously rich purple crocus and the soft, rather shy blue of the wood anemones. The snowdrops are still in flower, but beginning to fade and over the next few weeks, once the flowers have gone we’ll lift and divide them “in the green” to spread their winter cheer around the whole garden next January.

We have been tidying up the established wildlife hedges at the back of the wildflower meadow and on the Greyfriars side of the chapel, litter-picking, cutting out the hefty brambles and pruning back any growth that overhangs the grassy paths.

The wildflower meadow is coming back to life after its winter dormancy. Small rosettes of cowslips are appearing and will soon be in flower all across the meadow and the foliage of the scabious and cow parsley are beginning to appear amongst the grass. The meadow turf which we laid along the riverside back in October (taken from the area that is now the cutting garden) has taken strongly and is thick with patches of yarrow and hedgenettle, as well as many wood anemones.

Robert has been undertaking lawn maintenance this week, raking out moss in the Cloister Garth to give the grass some breathing space and neatening up the edges along the paths. The raked moss has been spread at the back of the wildlife hedge so that nesting birds can use it to line their nests. The robins, always bold and cheeky, were helping themselves from the rakings even before they got to the wheelbarrow!

We have sown hard-wearing grass seed down the wisteria path which suffered badly from the wear and tear of the contractor’s wheelbarrows when the entrance courtyard path was being constructed. Hopefully with some mild, damp weather it will start to germinate quickly and be lush and strong by the time we open to the public. We’ve also sown grass seed on a patch of bare ground by the old brick shed between the Cloister Garth and the cutting beds which will visually join up the lawns and grass paths between the two spaces.

The dry weather of the last couple of weeks has provided perfect conditions for weeding the cutting beds. The surface of the soil had been compacted by the snow and using the hoe to gently break it up and uproot the small early germinating weeds is extremely satisfying and means that the beds are now ready for seed-sowing in the next few weeks once the soil has begun to warm up. We have already planted several rows of achillea millefolium (yarrow), acanthus mollis (bear’s breeches) ammi majus (Bishop’s flower) and digitalis (foxglove) –  all grown at home from seed last autumn. We have been transplanting clumps of geranium sanguineum (cranesbill), tanacetum parthenium (feverfew) and borago officinalis (borage) from other parts of the garden where it is not wanted, and the penstemons and lupins transplanted from the riverside border are thriving in their rows. We have also put in the irises which were dug up from various places around the garden last year and potted on over the winter, so the Cutting Garden is taking shape and has lots of promise for colour and interest later in the summer. 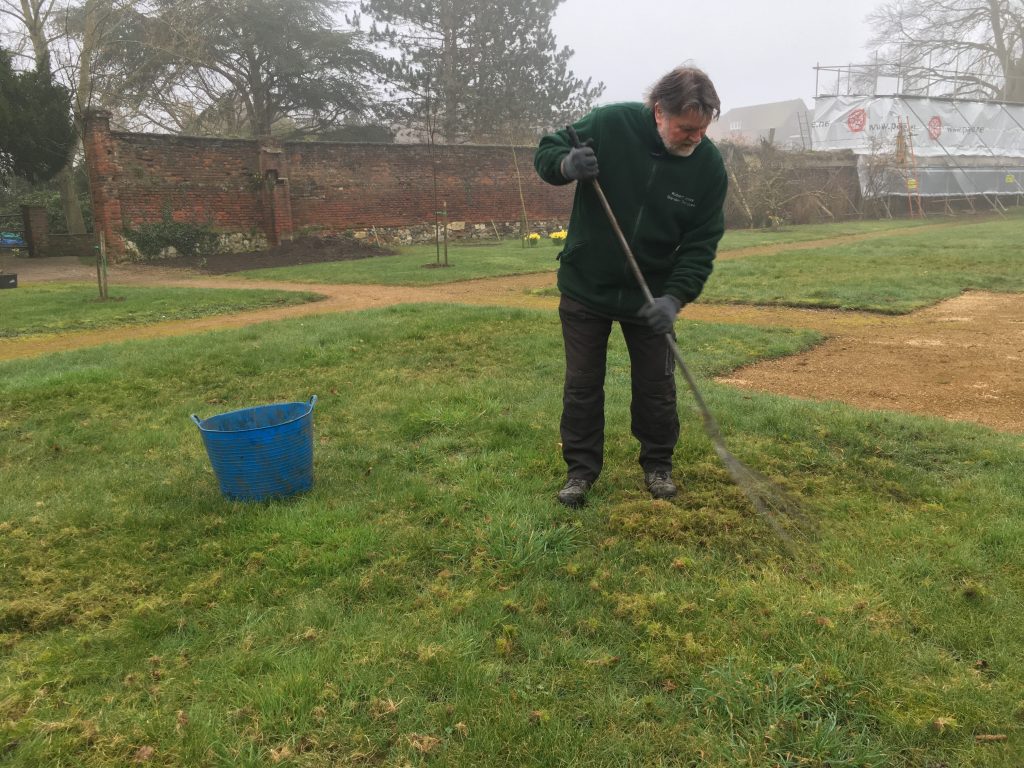 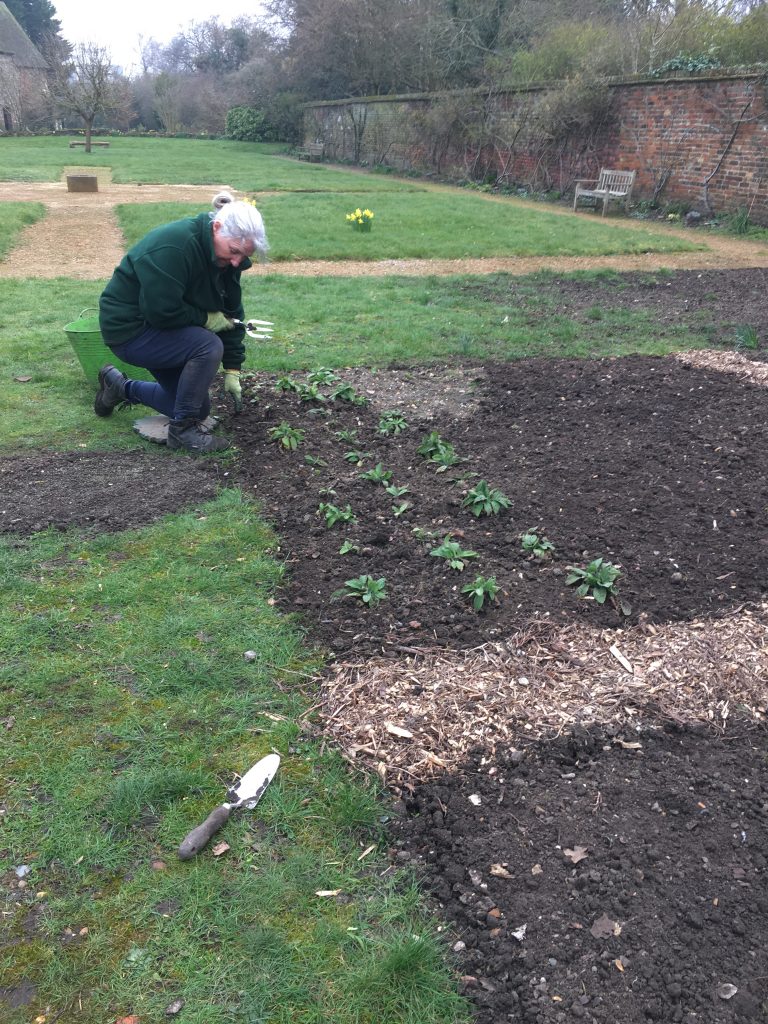 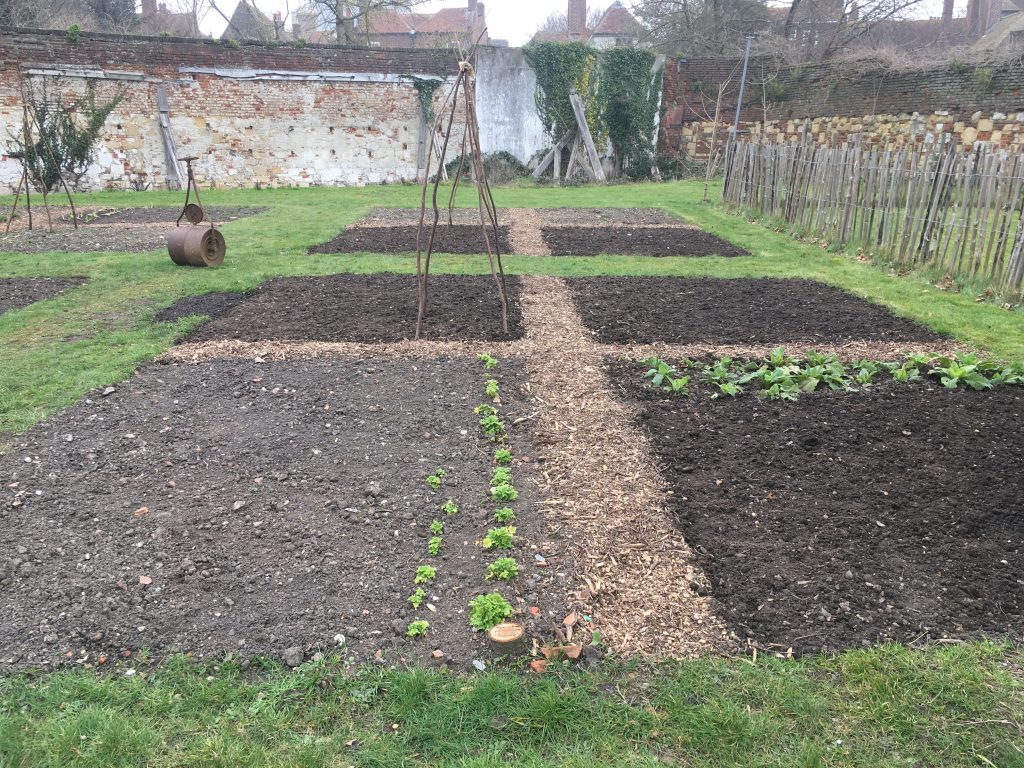