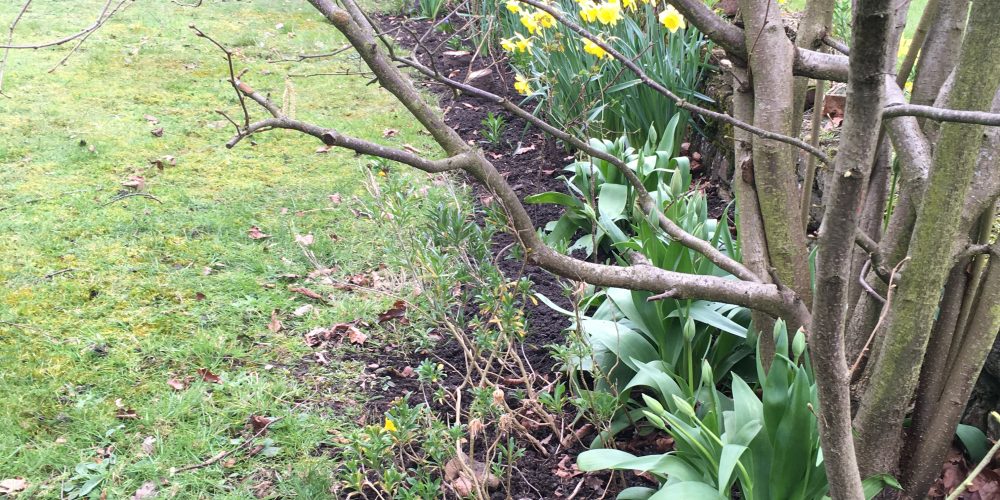 The wet showery weather has had us running to the shed for cover at intervals in the past week or two, but the rain has been very good for the bare root trees we planted near the mown paths in the wildflower meadow. There are two large greengages, a plum and three old apple varieties. Traditionally, medieval monks were buried in unmarked graves beneath apple trees. Planting fruit trees in the meadow gives a respectful, historical nod to the first Franciscans who would have lived (and died) here.

The cutting garden is gradually developing. We planted vigorous sweet pea plants (raised from seed and hardened off in the cold frame at home) to scramble up two of the hazel wigwams. We’ll put in a later batch around the other two wigwams in a few weeks so that we get a prolonged flowering period in the summer.

Sarah the garden designer donated some dahlia tubers – all single peony-flowered types (great for pollinators) and each one named for a Bishop, so very fitting for the “Holy Garden”.

Work has started on moving our shed from its current position beside Assisi Cottage over the wall into the cutting garden. We laid a firm base of heavy paving in the corner behind the old brick shed on which it will stand happily. All the oxeye daisies that we moved out of the way went into rows in the cutting beds and the large clumps of cyclamen hederifolium were spaced out along the rose border in the Cloister Garth.

Weeding continues; all along the rose border and the border behind the low wall near the chapel have been carefully hand-weeded and “curated”….. taking out any of the old tulips which have come up through the autumn planting in the wrong places or are diseased with twisted, curled foliage and no flower buds forming.  Clumps of snowdrops “in the green” have been lifted from elsewhere, divided and replanted in gaps. The wet winter has taken its toll on a few of the hyssops and oregano plants, which aren’t yet showing any signs of new growth, but we will leave them be for a few more weeks and hopefully they’ll pull through.

We cut down and removed the large syringa (lilac) from behind the low wall near the chapel. This area of the garden will, in future, be planted to create a symbolic reference to the altar in the layout of the original Franciscan church building. Robert dug out the huge rootball whilst Tracey made very useful trimmed poles from the cut stems. It’s always a difficult decision to remove a large feature plant, but this really was a case of “wrong plant, wrong place”. We will make good use of the poles in other parts of the garden for supports or frames and the twiggy growth will make great supports for the peas and beans we are planting soon in the cutting beds.

Birds noticed in the garden this week:

Tracey and Robert… the gardeners 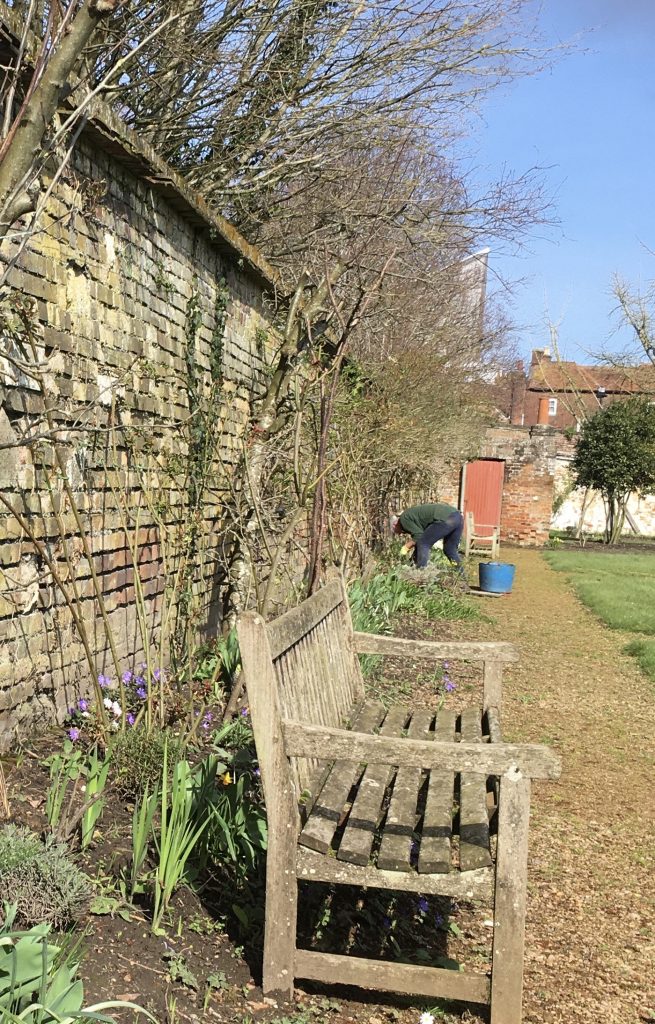