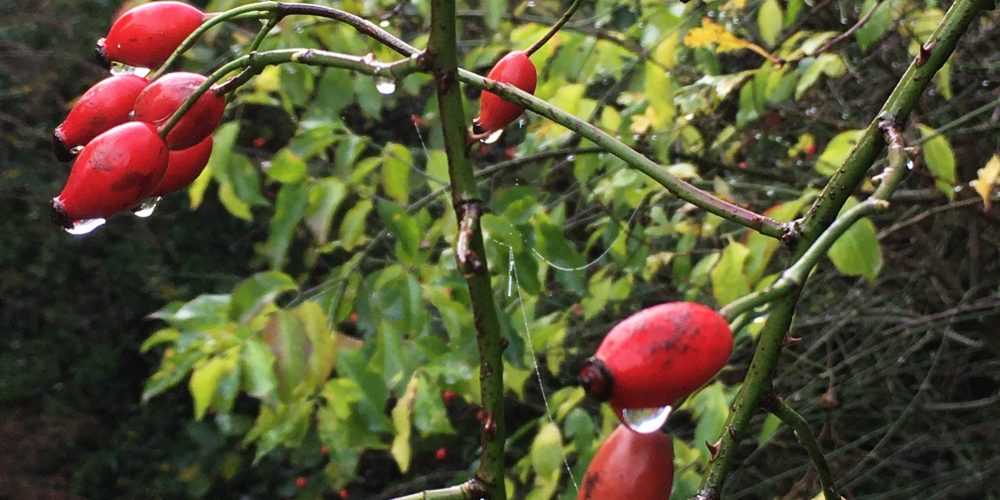 It was good to get back into the Gardens after a month-long break over Christmas. The hard frosts, high winds and heavy rain don’t seem to have done any damage and everything is looking much as we left it. Some early daffodils are already out in bloom along the Lovelace Wall and many more clumps are pushing through in other places.

The majority of the bare root roses we planted back in November are showing signs of strong new buds, promising lots of growth and flower later in the year.

Robert will need to get into the river soon to clear the debris that has collected again on the chain across the Little Stour but with flood warnings issued for the Stour this week it was flowing too high and fast to be safe.

We worked in the Master’s Lodge Garden this week, beginning the project to redevelop the vegetable and fruit garden. We took down the old, broken fruit cage structures and dug out the masses of brambles and raspberries that had run wild. Among these we found some old leggy blackcurrant bushes that had been smothered so we dug them out as carefully as we could to replant in the main garden, at the back of the cutting beds.  They have been pruned back and will hopefully survive, even if there won’t be any fruit this year.

The two large redcurrant bushes (which were as tall as trees) have also been given a good prune to remove old wood, encourage new growth at the base and shape back into a more manageable open bush. We hope they will fruit well in the summer.

The soil (despite the wet weather) is light and friable and was a pleasure to dig over. The fruit area is now clear of roots and weeds. We have bought bare root pear and cherry trees to plant here, and will turf the area in early spring.

Next week we plan to weed out and dig over the vegetable beds, removing the old overgrown gooseberry bushes in the corner. Once the whole area is clear we’ll divide it up using bark paths so that each planting area is easy to access and create a winding bark path from the veg plot across to the main lawn.  We have new raspberry canes, blackcurrants and gooseberry bushes to plant and will erect some hazel pole wigwams for climbing beans and sweet peas later in the spring.

We hope that once finished the whole area will be much easier to look after and that the residents will be able to grow a variety of salads and vegetables.

We also spent an entire morning clearing leaves from the front courtyard and clearing the drains of weeds and debris. We filled eight 1 tonne builders’ bags with fallen leaves, some of which we’ll store for leaf mould.