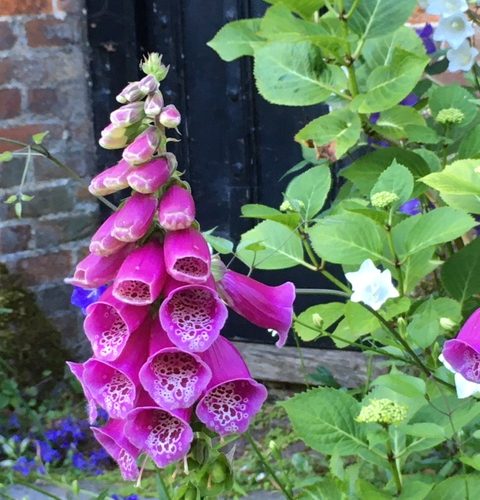 The heatwave and very dry weather has taken its toll in the Gardens. The grass areas are parched and many of the established plants (including the meadow) are fading early to save energy and preserve themselves. Being in the garden during our first summer we can see that specific planting needs to be done as a priority to provide summer and autumn interest for the paying visitors next year.

Some of the newly planted trees have suffered too, despite our weekly watering schedule. Sadly only one of the beech trees along the riverside in the wildflower meadow has survived, none of the others have shown any signs of growth at all, and the morellos and quinces in the Cloister Garth are alive but don’t seem to be thriving in the very dry, thin soil.  With this in mind we will be sure to make sure that we improve the soil with organic compost in any future large plantings, to feed and retain moisture at the roots at those early crucial stages.

On a more positive note, we have begun a project in the garden of 6A. So far we have cut back the dead buddleia and wrestled out a decrepit old chestnut fence along the riverside that was completely smothered with Russian vine and ivy. Once all this was removed we exposed some attractive iron railings, which despite listing slightly are being held securely in place by the sturdy roots of the buddleia and Russian vine! We dug out the border along the riverside and planted lavenders there which will grow together to form a scented hedge, but still give a good view of the railings and the river. We planted lavender “Munstead” at the end nearest the car park which will grow taller and bushier, and “Hidcote” at the other end which will remain more compact in front of the Russian vine.

As well as this we dug out the old and rotten raised beds and used spare bricks and paving slabs that we found hidden under the weeds to make a gravel garden area. We’ve put in verbena bonariensis which will thrive in the very dry gravelly conditions and plan to underplant them with creeping thymes and rosemary to give scent and some evergreen interest. In any spare moments during the next week or so we’ll weed and tidy the rest of 6A’s garden, already we can see that beneath the overgrowth there are some lovely plants which we can expose and make features of.

Another successful project has been to clean off the Parvis and plant 5 large terracotta planters with grasses that will tolerate some shade. We were also able to use part of the old phormium which we rescued after it was dug out (in bits) when the entrance path renovations were started back in March. The poor plant was destined for the skip, but we took several sections of it home, repotted them, and have been nursing them over the last few months. We used the largest and most impressive to make the centrepiece on the Parvis. It should thrive now and double in size in a year or two making a really dramatic feature plant.  The carex and festuca glauca grasses in the pots around it are all evergreen,  the miscanthus “zebra grass” will die back in the winter but has such gorgeous, upright, green and cream stripey stems all summer it’s worth waiting for!