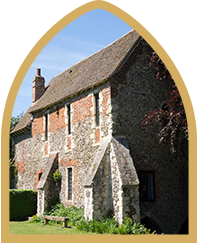 Greyfriars Chapel, set in the Franciscan Gardens, is the only building now remaining of the first English Franciscan Friary built in 1267, forty-three years after the first Friars settled in Canterbury, during the lifetime of St Francis of Assisi.

The building, although much altered, is all that survives from the original Friary. It is believed to have been the guest house. After the Dissolution it was secured for £100 by Thomas Spylman, one of the Receivers of the court of Augmentations who disposed of former church property and it became a private house. Over the years it had many uses and the graffiti and studded door on the ground floor indicate that it was once used as a lock up for the Bridewell then in the Poor Priest’s Hospital, now the Canterbury Museum.

The house was restored in 1919 and later through the generosity of a Canadian QC, Harry Jackman, it was modernised and the upper rooms furnished as a chapel and vestry, where an Anglican Eucharist Service takes place weekly on a Wednesday at 12.30 at which the public are welcomed.

Plan Your Visit
Check Opening
Times
How To
Get Here