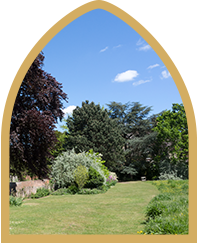 The Franciscan Gardens are at the rear of Eastbridge and are a haven of peace in an otherwise busy city. They are the grounds of the first Franciscan settlement in the UK and are a Scheduled Ancient Monument.

The first Franciscans, or Grey Friars, arrived in England in 1224 and within a short time had set up houses in Canterbury, London, Oxford and Northampton. Initially the Friars lived in poor buildings but by 1250 the order recognised the need for better accommodation and agricultural land to provide for themselves. Beginning in 1267 the Canterbury house was rebuilt in stone and Alderman John Digge a wealthy landowner purchased for the Friars an area of land by the river. Eventually the site extended to 18 acres, part of which is now the Franciscan Gardens.

A large house (no longer in existence) owned by the Lovelace family occupied much of the gardens from the late middle ages.  The long ancient brick wall still visible is all that remains of the Lovelace occupation.  During the 19th and 20th centuries, much of the gardens were used as a commercial nursery and were owned by the Dean and Chapter of Canterbury Cathedral.  Eastbridge Hospital purchased the gardens from the Dean and Chapter in the 1990s.

After the Dissolution in the late 1530’s, the Friars left and their land and buildings became private property. In 1958 what is now the Franciscan Gardens was acquired by the Dean and Chapter and in turn in 2000 by the Eastbridge Hospital.

In the 20th century a Franciscan movement, the Society of Saint Francis, grew within the Anglican Church and the establishment of a Franciscan house at 6A Stour Street in 2003 saw the Franciscan Brothers return once again to the site. Brother Kevin SSF is currently the Master of the Eastbridge Hospital.

Open from Easter Monday to 30th September from 10am to 4pm.

Plan Your Visit
Check Opening
Times
How To
Get Here