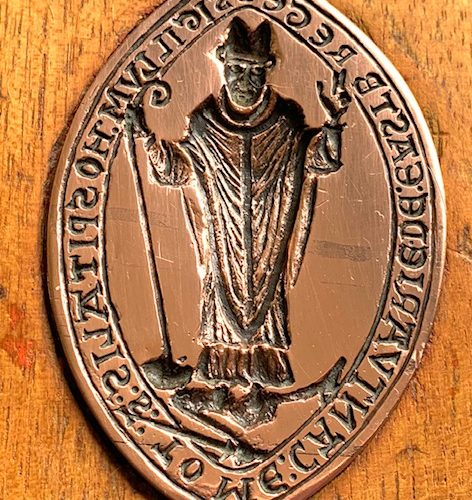 The Eastbridge Hospital Seal.
This is the original female part of a two part seal which would have been filled with hot sealing wax and then compressed in a machine similar to the modern (Victorian!) one we now use but which “cuts” the image of St Thomas onto paper rather than creating a wax impression. The small wooden holder was made simply to keep the detachable seal safe when not inserted into the pressing machine. The male half would probably have been permanently fixed in the press and could  even be the less heavily engraved  seal we still use in the 19th century press as the design and size almost completely matches .
The seal itself is bronze and measures 80mm high by 55mm wide. The wooden holder had split in several places and the seal dulled with age so as to be almost unrecognisable. Metal polish and 0000 grade steel wool quickly restored it to its original splendour.
Nicholas Andrews.
Clerk & Receiver to Eastbridge Hospital.