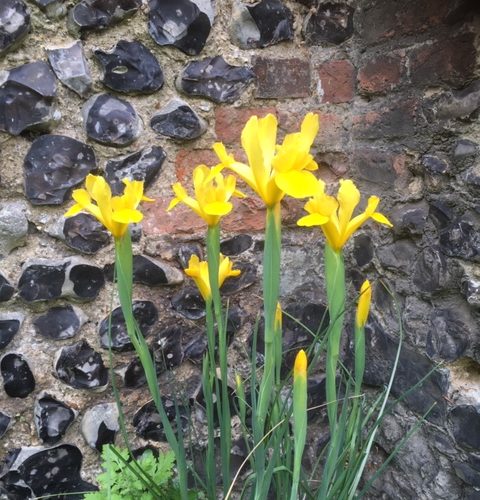 Our weekly blog from our gardeners.

Another busy week! Monday prune and reshape the two apple trees in the long border in the Cloister Garth. Originally these trees were planted as espaliers and fanned out horizontally along the wall. Unfortunately they have been so vigorous over the years that there were thick strong branches leaning out across the pathway, losing the original shape. Stefan took out the lowest branches of the overhanging sycamore trees (which were making the apples lean out for more light), then cut back hard the older apple branches that were growing in the wrong places. We now have more shape and structure to work with and have been able to tie in some of the younger more flexible wood to maintain a flatter, fan shape. In the winter they can be pruned again to promote new growth which will go in the directions we want it to!

We cleared all the cut branches and dragged them over to the new composting area. The thickest branches were logged up. The thinner, leafy parts have been piled up in one of the composting bays and will be put through the shredder next week to add to the compost pile. We only built the composting bays last month, but already one is full of cuttings and garden waste and is “cooking” down nicely! It will make a really nutritious mulch to spread over the beds and borders in the autumn.

We had the challenging task of wrestling with the rambling roses that had been growing through the apple trees. They all needed to be very carefully threaded back behind the apples so we could tie them to the wire supports along the wall. Much easier said than done. Even with long sleeves and thornproof gloves we both got scratched and pierced to pieces. Luckily no-one was around to hear our grumbling!

We spent a morning in the Eastbridge Courtyard, transforming the space into a more welcoming area for the residents to use. Some of the existing plants that had got very woody and overgrown in their pots have been pruned back and re-potted in new compost which will hopefully give them a boost and cheer them up!  It was lovely to meet Vera, Terry, Mary and Diane who all came out to give us moral support (from a safe social distance of course!)  We have used mainly evergreens with variegated leaves to give a lighter, brighter look to the shady corners.  Along the new trellis panels we have put scented jasmine and honeysuckle which won’t mind the shade and will smell lovely in the enclosed space when they are in flower.  One of the variegated hebes we planted is a “franciscana” variety which is very appropriate!

We brought over some hardy geraniums, violets and agapanthus from the main gardens, which we rescued from the walled garden and potted up a few weeks ago. So glad we saved them!

The courtyard now looks much brighter and tidier and once all the new plants get established it will hopefully be a colourful and perfumed area for the residents to sit out and relax with a cup of tea (or gin and tonic.)

Top treats to see in the gardens right now: